Character from “Back to Salem” actually existed?

Could it be that a character from Back to Salem existed and secrets of her fate are in my novel?

While writing my first novel I came to realize that many of the situations I was writing were a glimpse of my future. It was this realization that gave me the idea of Back to Salem, where the protagonist is a precognitive novelist and starts to see the plot of her suspense thriller emerge in her life.

A phenomenon closely related to precognition is retrocognition, the ability to tune into a past event psychically. Both precognition and retrocognition are claircognizance, the psychic process of clear thinking. Creative individuals, particularly writers, musicians, and artists often tap a stream of consciousness from other eras.  When writing in this inspirational state, we will routinely find echoes of the future or past in our work. 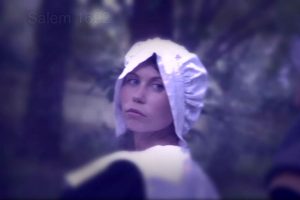 In my story Back to Salem, to solve a mystery my protagonist has to find clues in her past life—one during the Salem Witch Trials. One of my characters, Rebecca Johnson, is a witch.  In my novel, Rebecca resides in Andover, MA, and goes to trial in September 1692. Part of the intrigue of Back to Salem is that the reader doesn’t know what happens to Rebecca until the end of my story.  The reader may wonder, ‘Was she hanged?  Imprisoned?  Did she survive the witch-hunts?’

While I was writing the second draft of this novel, I decided to reference some of the books I used in my research within the book. In one chapter I have the protagonist, Jessie, coming back from a past-life regression where she learns she had been a man and married to Rebecca in a past life. She returns feeling a love that has survived for centuries and yearns to discover what happened to Rebecca. She goes to the library to search the records for clues.

While working on this chapter, I reviewed my books deciding which ones to reference in my story. I remember retrieving Titbuba Reluctant Witch of Salem by Elaine Breslaw, leafing through the pages and passing the bookmark which reminded me I hadn’t finished the book. I came upon an appendix I had never seen before, where I found a list of the actual accused. I was shocked to find this information:

I stared at the page for the longest time, recalling synchronistic events which had influenced me to name my character Rebecca Johnson. My Rebecca had also lived in Andover and was brought to trial in September that same year. With this realization, I felt a surge of energy in my chest.

Learn more about this book!

The hair stood on the back of my neck. I knew how fitting my discovery was. Tituba Reluctant Witch of Salem stated that Rebecca Johnson’s outcome was unknown. There were close to 150 names on that list, and none of the others said, “Unknown.” In my mystery, I didn’t want my readers to know what happened to my Rebecca Johnson until the climax of my tale. My discovery was not only fitting but confirming, which is why my experience of uncovering Rebecca’s reference in a history book became a scene in Back to Salem.

Could it be that the actual Rebecca Johnson from the 17th century wanted her story to have been told? Want to know what happened to Rebecca? You’ll have to read the book.