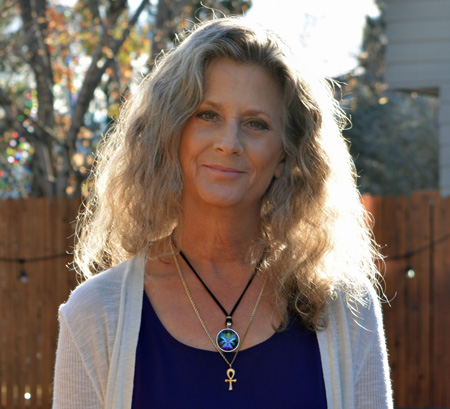 Alex Marcoux is a multi-award-winning author of visionary fiction and spirituality books. While she’s been called many things, including the “Lesbian Dan Brown,” the one title she claims is a truth-seeker as she has always sought out truths hidden from humanity and woven them into her work, whether writing suspense or spiritual books. Since 2011, she has been on a journey, learning about the sacred mysteries and magic of autism and its relationship to humanity’s spiritual evolution. Many of these truths are in Marcoux’s award-winning book Destination New Earth and her visionary fiction novel, The Unsuspected Heroes. Marcoux has six books.

Alex Marcoux never aspired to be a writer. In her youth, she wanted to be a police detective. Still, somehow her Leominster High School counselor convinced her that she had the aptitude for science, and she headed off to the University of Massachusetts at Amherst. There Alex received a B.S. in Food Science and quickly ended up in a General Foods lab where, as a food technologist, she was instrumental in the product development of Crystal Light, the first “great tasting” diet soft drink. Years later, she worked for Jeffrey Wigand, The Insider from the tobacco industry, as a development chemist for Brown & Williamson Tobacco Company. Alex resigned from the tobacco industry in 1991, never returning to conventional research.

Marcoux moved to Colorado in 1991 at the dawn of the anti-GLBT initiative, Amendment 2. The hostile political climate inspired her first book, Façades, published by The Haworth Press, and Alex received a Rocky Mountain Fiction Writers Pen Award for its publication.

Alex's second novel, Back to Salem, has been dubbed a “gender-bending thriller” and is a Lambda Literary Award Finalist for best lesbian mystery. The sophomore novel was also an InsightOut Book Club selection. The story drew the attention of Atlantis Moon Productions, an independent film company that produced Back to Salem: The Short using Alex's script.

Her third novel, A Matter of Degrees, is a suspense thriller featuring Jessie Mercer, her protagonist from Back to Salem. The book was a Golden Crown Literary Award Finalist and a Gaylactic Spectrum Award Nominee for speculative fiction. New York Times bestselling author Lisa Gardner endorsed the book and warned, “Fasten your seatbelt and prepare for a wild ride.”

Her first three novels, originally published by The Haworth Press, were picked up by Bella Books and brought back to print and ebook.

Alex has been published in Science of Mind magazine and was the National New Thought Examiner on examiner.com from 2009-2015. The Authors’ Show selected Marcoux as one of the 50 Great Writers You Should Be Reading (2010). She contributed her story, “An Unusual Path to Awakening” to Awakening and Applying Intuition and Psychic Ability: True stories from the Edgar Cayce Wayshowers (2018).

In 2011, Alex was welcomed into a world few people see, the sacred mysteries and magic of autism. When asked by three nonverbal Autists to make known their truth, The Unsuspected Heroes emerged. This novel is A Journey to the New Earth series’s first book. This book is a 2021 award-winning finalist in visionary fiction in the International Book Awards and American Book Fest “Best Books” Awards.