What is the New Earth?

A small group of us set out to write a book to answer the question “What is the New Earth?” in everyday language. That book, Destination New Earth: A Blueprint to 5D Consciousness, will be out on March 20, 2022, but I can share some insights here.

What have others shared about the New Earth?

The shift to 5D has many names.

The transformation I am writing about has many names: the ascension, the awakening, the paradigm shift, shift in consciousness, even spiritual evolution. This event has been in the making for eons.

It is written about in the Bible as the New Heavens and New Earth and referred to as the eternal dwelling place for select people believing in Jesus. The Ra Material: Law of One in the 80s writes about opportunities for ascension every twenty-six thousand years, being the “harvest,” and we are currently in that time. Much of Dolores Cannon’s work describes a dimensional shift separating an old and new Earth. Eckhardt Tolle’s bestselling self-help book A New Earth: Awakening to Your Life’s Purpose is about surpassing our ego-state of consciousness to help bring about a shift in consciousness.

Other notable authors write about the New Earth, though none have approached it like our group in Destination New Earth.

What will happen during the ascension?

Over the decades, esteemed authors have written about the New Earth from the perspective of an event occurring that will take us to the New Earth in the future. Many authors share that the Earth will split into our current third and fifth dimensions. Others suggest that some people will ascend to the heavens while others will be “left behind.” Several indicate that those remaining behind will end in apocalyptic destruction, while those climbing to the higher realms will live in peace and unconditional love without dualities.

A Unique Perspective on the New Earth

In Destination New Earth, we share that the New Earth is not about what will happen sometime in the future; it is about what is happening today on our planet and how it impacts you. It is not a physical separation creating two physical planets. The New Earth is actually here today, and it is up to us to shift our perspective to experience it.

It is time for humanity to make an evolutionary jump. The New Earth expresses humanity’s shift in consciousness and the next evolution of humankind, a return to unity consciousness, to Oneness. It has been in the making for eons and part of the Master Blueprint of the universe, impacting humanity and other off-planet and interdimensional beings.[1]

The New Earth is within each of us. It is not outside of us.

The human body must raise its vibration to experience the ascension. This evolutionary experience occurs at the planetary level, meaning that Mother Gaia, Earth herself, is shifting along with all on and within it. The experience of coherence, of being in sync with the Earth’s growth, is the New Earth. It is a new expression for humankind.

“The book (Destination New Earth) is about humanity’s accountability to themselves and not pushing it out to somebody else to fix it.”[2]

Each is responsible for our own awakening, and we need to stop expecting a “savior” to save ourselves, for we are the saviors. The awareness of our own magnificence and Divinity will shift us into the New Earth.

What makes this book unique? 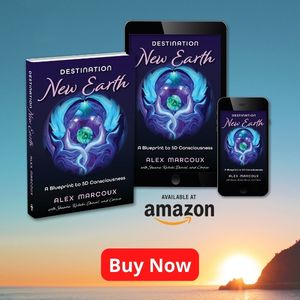 This project was a collaborative effort between myself and three individuals, Shauna Kalicki; a psychic medium; Connie, an intuitive; and Daniel, an Ethereal Autist.

The information in Destination New Earth comes through a unique process. At the foundation of the material are channeled messages from Ascended Masters and higher dimensional beings, including Cerian, a sixteenth-dimensional collective. Our group further clarified the information through three levels of discernment.

Our intentions for this book are to reach those on an evolutionary path of awakening. Each has a unique blueprint that needs to be honored. The individual takes on a more significant role in this planetary shift in consciousness when doing so. Why is that important? Because the ascension is not a done deal. It is a probability and a possibility, but still mainly up to humanity. The ascension will occur individually until a critical mass of people stabilizes in the fifth dimension, and then there will be a mass awakening.