Sample Chapters of The Unsuspected Heroes

I am so excited The Unsuspected Heroes: A Visionary Fiction Novel (A Journey to the New Earth Book 1) is now available. This is an extraordinary story, inspired by real people in my life. I am honored to share it with the world. It is a work of visionary and metaphysical fiction, taking the reader on a journey of spiritual awakening. Enjoy this sample and as always, I appreciate you. Thank you for sharing it!

A Time Loop Ending in the Apocalypse and One Last Chance to Stop It!

Humanity is caught in a thirteen-thousand-year Groundhog Day ending with Earth’s destruction. The Ascended Masters turn back time and create timeline glitches to give humanity one last chance at planetary ascension. One of the timeline tweaks is the Dark and Light teaming up; another is The Unsuspected Heroes.

Enjoy the sample chapters with this downloadable PDF (the Prologue only is below). Lastly, the Kindle version of the book is on preorder at a special discount price.

Sometime in Earth’s Near Future, and yet, Time Is an Illusion

One may think of it as twilight, that soft, glowing diffused light, but that is not quite right. It is the space between nothingness and Oneness, where it appears that there is nothing except the promise of the coming day or night. That is where the Ascended Masters and Archangels of the Cosmic Council meet to discuss the destruction of Earth in the early twenty-first century.

The Divine Father, Master Melchizedek, steps toward the center of the heavenly landscape. “We know the implications of the other failures. This disaster will impede the involved souls even further. It’ll take many, many millennia for the soul scars to heal, if ever.”

From the outside circle, Archangel Mikael emerges, bowing his head, his sword by his side. His enormous white wings now folded in defeat, and his voice low. “With Gaia gone, the universe is out of balance. Earth was the Divine Feminine. This entire universe and all of its parallel existences are on a course of self-destruction.”

Archangel Metatron moves forward, sacred geometric patterns illuminating his being. He adds, “Yes, we have seen failures in thirteen parallel expressions of Earth already. All will go soon, and we are starting to see the collapse of Earth-616, the New Earth.”

Her Grace, Lady Anna, steps forward with vibrant red robes fluttering out at her feet. She looks around, seeing silhouettes of the council members. “What are we going to do about it? Do we give up on this universe and these souls? This was their chance to ascend.”

A Galactic Being of Light, a master from another universe, steps forward, “This is the fourth planetary destruction in this universe. Avyon, Avalon, Maldek, now Earth. These souls will not recover from this.” 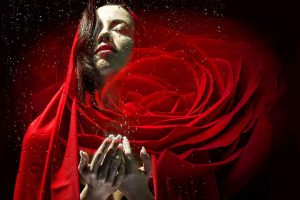 A female voice reverberates from the outside circle. “We can’t fix this. Only humanity can.” The others step back, permitting the Divine Feminine, Master Magdalene, space. She moves slowly from the crowd; a scent of roses lingers as she passes.

A multidimensional embodiment of Magdalene is Mother Gaia. Magdalene’s every step is with pain, from echoes of losing Earth, and the failures in parallel worlds. Those near her form a ring around her. As she moves, they respond, as if an orbit pulled by Mother Gaia.

“Humanity will always destroy Earth until it awakens.” Magdalene waves a hand, and a holographic map forms around and above the group.

The Light Beings respond by falling into a large full circle, eyeing the multidimensional schematic of the moment. One can see all in the moment as it’s connected to every life, every timeline, every parallel existence, every aspect of themselves, including the Source, the most powerful Energy. In the moment, one connects to their Godself.

Standing in the center, Magdalene closes her eyes, pauses, and sets an intention. With a wave of her hand, the holographic map responds. Three specks light up in the projection, revealing a glimmer of hope. 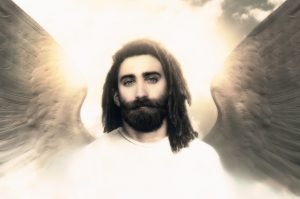 Jesus, the Cosmic Christ, steps forward, his cascading robe illuminated with star systems. He studies the work of his beloved, Magdalene, and raises a finger toward one of the three specks. As if he has a lasso, he harnesses one bit and hurls it above their heads. Holographic cinematic images stream various tweaks to the timeline, revealing possibilities to averting Earth’s destruction.

Similarly, Jesus facilitates the second and third simulation of changes to the timeline. It is the third recreation that piques the Cosmic Council’s interest.

Mother Ray, Mother Mary steps into the inner circle, a blue cape covering her robe. “This is it!” She points to the third simulation. “This is the one point in time, and one parallel reality that offers the most opportunity to correct the course of history and avert Earth’s destruction.”

There is immediate consensus among the Masters, the inner and outer rings. One Mind. They will plant seeds throughout history. Some of them will embody and walk among humanity before the great cataclysm and plant the seeds that will give humanity a chance to choose differently and save Earth.

The Gatekeeper steps from the outer circle and into the inner ring. This androgynous Light Being had watched the events with great interest, knowing that her time would come. It was her job to identify which Light Beings would return to Earth.

Much like an orchestral conductor, determining the proper balance of trombones to violins to bases, the Gatekeeper sets the intention to identify the precise vibrational patterns needed to achieve the desired results. She works swiftly, using ritualistic hand gestures, though the real magic is in mind. She re-verifies the results, assuring that her feelings weren’t impacting the information. After all, in one of her bodily incarnations, she had turned her back on him.

When confident, she speaks, “The Blue Ray vibrational pattern will be the inner circle. It will be the pebble that drops in the pond, reverberating concentric waves. The other teams will modulate the waves. This plan will only work, however, if Hakathriel joins us. The Dark and the Light must work together.”

To the Gatekeeper, it seems only fitting that the Blue Ray Alliance is on the front line, the pebble in the pond, given that they were indirectly involved in the fall of Atlantis, humanity’s fall in consciousness shortly after its creation. The team had been back to modulate these actions numerous times in ancient Egypt, ancient Greece, the time of Merlin, but the time humanity seems to remember the most, though not accurately, is the time of Jesus.

The Gatekeeper calls out the individual teams in her mind, and correspondingly, each squad takes its position, forming a series of large concentric rings that look much like a bullseye from above.

At the center of the group’s configuration, is the Blue Ray Alliance, where the Gatekeeper looks at her colleagues. She knows this team very well. The last time they had all been together in a timeline, they were all Essenes. The Gatekeeper nods at Lady Anna, Mother Mary, Jesus, Magdalene, Archangel Mikael, and a Galactic Being.

“I told you that this would only work if Hakathriel joins us,” the Gatekeeper says to the Blue Ray Alliance. 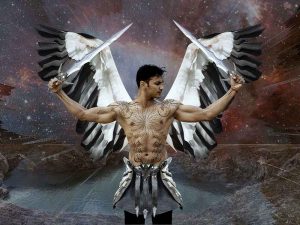 The team knows that working with Hakathriel, the fallen archangel would place the project in a bit of uncertainty. But they know it is the only way. Intuitively the group works together. Simultaneously they all back up, creating a larger circle with ample space at its center.

In an instant, the Gatekeeper telepathically summons Hakathriel from beyond the Cosmic Council. She knows he gets the message instantly and yet is not surprised by his delay. She waits, eyes closed with hand stretching upwards, knowing that he will not resist her invitation to talk.

She jolts backward from the sudden rush of air caused by Hakathriel’s magnificent wings. Standing before her is the dark archangel, wings fully expanded, almost touching members of the inner circle. 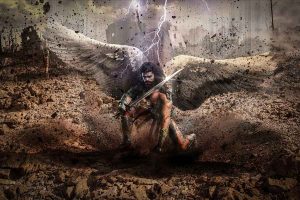 Mikael responds spontaneously, his wings now enlarged, with his sword in hand, while the other members of the group stand by on alert.

Hakathriel looks around the circle at each of his adversaries. For thousands of years, these beings had been his opponent in the game, including his brother. He looks beyond the initial inner circle and sees the countless Light Beings.

Hakathriel’s wings contract and he steps toward the Gatekeeper. “What is this all about?” his voice echoes.

“The future of Earth,” the Gatekeeper says.

“It does not look very promising,” he glares.

Magdalene steps closer to him. “We’re resetting the timeline to save Gaia.”

Jesus moves forward also. “We want to give humanity a chance to choose differently.”

“You mean, not side with me?” Hakathriel asks with a smile on his face.

Lady Anna moves closer. “Your side’s success ends with planetary collapse. This loop has to stop.”

Mikael contracts his wings and sets down his sword. He approaches. “Let’s give them a chance to ascend. Brother, without it, we both lose.”

To Hakathriel, there may have been logic in that they’d both lose. Maybe it was time to end the match and take the game to a new level. He was tired of being viewed as Satan, Lucifer, and the Devil. He remembered when he was the hero in the game, not the villain. Humanity changed everything for him.

“The dark and the Light working together?” Hakathriel softens. “What do you have in mind?” he asks, though he knows because there is One Mind.