What Happened to Alex Marcoux?

Some may wonder, what happened to author Alex Marcoux? Is she still writing? Did she find her missing heart-piece on Wayna Picchu? Has she gone to the New Earth? Did she discover the Holy Grail at the Chateau de Montsegur? Or, did she find the Atlantean Mother crystal in Arkansas? These answers and more to come.

No, I have not ascended!

Seriously, dear Ones, I have been on a journey and want to bring you up to speed. Last you heard from me, I had released my nonfiction book, Lifesigns: Tapping the Power of Synchronicity, Serendipity, and Miracles. Then poof! I disappeared, and I want to share why.

In 2011, a woman on my Facebook page saw the book trailer for my book, Facades. This woman, Tia, for whatever reason, told her friend, Gayle, to hire the creator of my video. As it turns out, I am one of those DIY-types, and I had created the trailer. I had just been laid-off, so when Gayle approached me to create a video for her and her daughter’s book, I said, “Send me the manuscript, and I’ll take a look.”

Autistic duo asks me to create their trailer!

The mother-daughter team, Gayle B. Lee and Lyrica Mia Marquez had written Awetizm: A Hidden Key to Our Spiritual Magnificence. Both authors are on the spectrum (ASD). The mother, Gayle, is high functioning with Asperger’s syndrome, while her daughter, Lyrica, is a nonverbal autistic. Lyrica began communicating with her mother on a keyboard when she was a very young child, before facilitated communication, a supported typing method, was introduced in the United States.

Gayle sent me their book, and I sat down to read it. I found much of their writing difficult because Lyrica’s prose is somewhat poetic, but that wasn’t the only thing. The material pushed my buttons. It became clear that this wasn’t going to be a quick read.

At the time, I was unemployed, though I had some contract work, and wondered which direction I was to go. Do I go back to work for the man? Or do I take the plunge and start a business? I had the feeling I was to meditate on it one evening, and after reading a chapter of Gayle and Lyrica’s book, I set the book on my bed, closed the door to my room, and returned to the chair to meditate. I set my intention to gain clarity on what I should be doing for income.

About 10 minutes into my meditation, there was a sudden crash, and I opened my eyes to see Gayle and Lyrica’s book at my feet. Somehow the book managed to fly off the bed and land in front of me. I took it as a sign to trust the process and continue with their book trailer. The fascinating thing was that after I finished the video (which I embedded at the bottom of this post), Gayle offered me a one-year contract to help them move their messages into the world. She told me that they were guided to make this offer and trusted it would work out.

The bombshell - I’ll get stuck in a Light tunnel?

About 18 months after I met Gayle and Lyrica, my book Lifesigns was published. I had written an extensive marketing plan to move the book into the world and was very busy. I sent Gayle and Lyrica the book, and Gayle read it aloud to Lyrica. Both proceeded to tell me how much they loved it. Yes, that made me feel good, and then Lyrica dropped a bombshell. She sent a note saying that if I continue with my plan to market Lifesigns, I will get stuck in my Light tunnel.

I had spent years writing Lifesigns and had a platform. Was I ready to abandon promoting my book? That was one of those life-changing turning points for me. The more I was introduced to their work, the more I realized I was a believer, and I wanted to help. So, I set my book promotions aside.

Autistic mystics shift the frequency of the planet 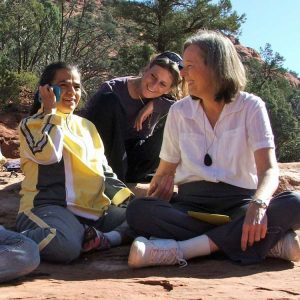 From left to right, Lyrica Marquez, Alex Marcoux and Gayle B. Lee discussing the New Earth

For four years, I became immersed in a world that few see. I’m not referring to a world where there is no hope with autism; instead, I saw their gifts; gifts of telepathy, healing, artistic expression, clairvoyance, to name a few. But that wasn’t what got my attention. I learned that Lyrica and many other autistics work selflessly, out of humanity’s sight, to shift the frequency of the planet in ways that’d boggle most minds. Why? So that more of humanity will experience the ascension, or the shift to the New Earth, in the days to come.

Gayle and Lyrica had created a small group of nonverbal autistics, their parents, and friends. The nature of the group was to support the autist’s work. My friendship with all of them grew. One day, Gayle asked if I would write their story. At first, I declined, as I was writing another book that I hold dear to my heart. But I could see that their messages weren’t getting the attention they deserved, perhaps, because the nature of this work is so unbelievable. When I was asked a second time to write their story, I agreed to let their stories be the inspiration of a book series, A Journey to the New Earth.

I call my autistic friends, “Autistic Avatars,” and I’ve learned that much of what they share is mythology. Not that the myth is a lie because it isn’t, it is a metaphor to convey profound concepts to explain things where no words exist to do so. My life changed after meeting these people. I have spent years researching, experiencing, and learning. I approach this book series with the same spirit, and there are many Truths in this tale thinly disguised as fiction.

Not all superheroes wear capes and have their stories told on the big screen. Some heroes wear masks to hide who they are. Lyrica shares, “WE agreed to sit in harsh suits of AUTISM until WE are freed to share our purpose for being here. Our suits of AUTISM are like Halloween masks.”

It is time that the heroes' masks are removed. It is my honor to tell their tale and reveal why they are here.

A Journey to the New Earth

So, you may ask, Alex, where have you been? Are you still writing? When is your next book coming out? I may have buried the lead….

I am on a journey to the New Earth. I have traveled with autistics to crystal digging expeditions. I have gone to Peru, Brazil, and France, as well as many other places all on a quest to seek Truths hidden from humankind. These experiences and a whole lot more inspire my A Journey to the New Earth book series; the first installment is being released later this year, titled,  The Unsuspected Heroes.

Watch for it! Much love and light.

Here is the book trailer for Gayle and Lyrica's book.