The Mitchell Hedges Skull is the only ancient crystal skull with a detachable jaw. It was carved from a single block of clear quartz, and there are no tool marks from its creation. Many believe that we do not have the technology today to create a skull with such precision. The skull was found in 1924 by F.A. Mitchell-Hedges in the ruins of an ancient Mayan pyramid. The anatomically correct head is representative of a female between 25-29 years of age and of Mesoamerican descent. Skeptics suggest that the Germans made it, others believe that the Atlanteans made it. The Mayans believe that some of the ancient skulls are rare and sacred gifts to the Mayans by the Grandfathers of the Pleiades. The Mayans believe that the crystals contain the consciousness from beyond our galaxy.

What is the Mitchell-Hedges skull? 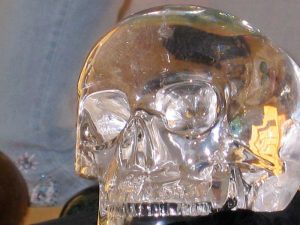 Related Articles:
« Back to Glossary Index