New Earth and Spiritual Ascension to the Fifth Dimension

Given that my upcoming book series is titled A Journey to the New Earth, many will be asking, what is the New Earth? What exactly is spiritual ascension to the fifth dimension? And what will happen during the ascent?

What is the New Earth?

She doesn’t speak. And unless she can assemble autistic humans across the globe, Earth is doomed. Again.

First, let me share what I don’t mean by the “New Earth.” I am not referring to Eckhart Tolle’s book, A New Earth, or the exploration of a new Earth-like planet, or Jesus’ ascension.

I do mean humanity’s awakening and spiritual ascension that many may refer to as the paradigm shift and the awakening to the fifth dimension (or the New Earth). What most don’t realize is that the New Earth is seeded, it’s here, primed, ready, willing, and waiting for its Creators to awaken to experience their New Earth.

With the Precession of the Equinox on December 21, 2012, our planet ended a cycle of approximately 26,000 years and began anew of moving toward the light and bringing back the Divine Feminine. The returning Goddess energy is not to rule, but to restore balance and harmony. We will experience a rebirth as we shift from duality consciousness to Oneness. To prepare for this paradigm shift, though, we need to move out of our heads and into our hearts. Why? Because what prevails in this new reality is a consciousness of love, joy, peace, and compassion.

What is Spiritual Awakening? What is the Shift in Consciousness? 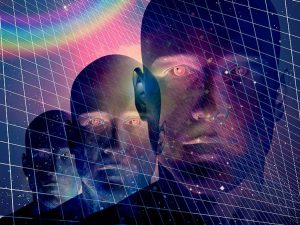 Humanity is shifting from a denser, egoic state of duality consciousness, to more unity and heart-based consciousness. This shift is the process of spiritual awakening that moves a person into a different level of awareness and a lighter vibrational frequency. The ascent is recognizing and accepting that you are an expression of the One Soul through remembrance, re-membering that you are a Divine Creator.

As a Creator, you create your New Earth experience.

Each person has a conscious choice to participate in the evolution of humanity or not to engage. Both sides of that decision are perfect. Spiritual Ascension is a personal choice, and whether one chooses to participate or not, it does not diminish the truth about who that individual is, because each is a Divine Creator.

Earth, or Mother Gaia, is a conscious living being who is going through her evolution. Imagine that? We are like fleas on this beautiful being’s back! Imagine how much she must love us with the way we have treated her? Perhaps another topic of discussion. As Gaia goes through her ascension or rise in vibration and dimensional awareness we need to choose, do we join in, or do we resist?

What will happen during the ascent? 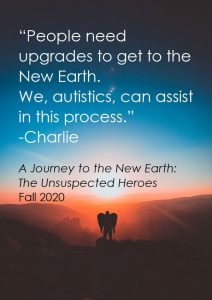 Autistic Avatars trigger DNA activations to assist in the ascension of humanity. Their story is shared in A Journey to the New Earth: The Unsuspected Heroes. Coming Fall 2020

No, there will not be the rise or ascent of the physical body to the heavens as some have imagined. Each person choosing to ascend will experience an increase in their frequency and dimensional awareness. Most of humanity has resided in the third-dimension or 3D plane of consciousness. There will be a shift from 3D to 4D (fourth dimension), and some to 5D (fifth dimension) and even beyond.

What happens during ascension? We bring in more Light from our Higher Self, our I AM Presence, which will open opportunities for miracles and spiritual growth. How can we trigger this? We need to open our hearts, which will increase our frequency. Ascension is an opportunity for every person on the planet. But it’s a choice.

The 3D body will need to experience DNA and pineal gland activations to make this journey. These activations or upgrades may be (or have been) triggered by Autistic Avatars, those unsuspected heroes working selflessly to assist in the ascension of humanity. Their story is shared in A Journey to the New Earth: The Unsuspected Heroes.

What is Spiritual Ascension to the Fifth Dimension?

The New Earth or fifth dimension is an interim end-destination where those who choose to evolve spiritually, experience a paradigm shift. Each person is the Creator of their New Earth or Terra Nova. I suggest it is an interim destination because humanity is barely in its toddler phase of humankind's evolution.

Update on the Ascension

There is much to share on the topic of humanity's evolution and the role of the Pure Autists in our new book, Destination New Earth: A Blueprint to 5D Consciousness. Destination New Earth reveals what the New Earth is today, the autistics’ role in humanity’s ascension, and how you have a unique spiritual blueprint. When awakened to your role, you become part of a much larger plan to help humanity in a planetary shift in consciousness. 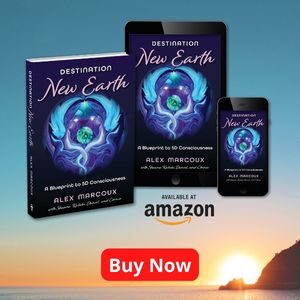 What does the bible say about the new earth?

There are multiple references to the new earth in both the Old Testament and the New Testament, which refer to humanity’s final and redeemed status. It even survives into the early Church’s modifications of Jesus’s teaching in the Nicene creed as “We look for the resurrection of the dead, and the life of the world to come.”

• “See, I will create new heavens and a new earth. The former things will not be remembered, nor will they come to mind.” Isaiah 65:17

• “As the new heavens and the new earth that I make will endure before me,” declares the Lord, “so will your name and descendants endure.” Isaiah 66:22

• “But in keeping with his promise we are looking forward to a new heaven and a new earth, where righteousness dwells. 2 Peter 3:13

• “Then I saw “a new heaven and a new earth,” for the first heaven and the first earth had passed away, and there was no longer any sea. Revelation 21:1

Photo by nappy from Pexels

Photo by Rakicevic Nenad from Pexels